Warning: "continue" targeting switch is equivalent to "break". Did you mean to use "continue 2"? in /homepages/17/d463411369/htdocs/zooeye/wp-includes/pomo/plural-forms.php on line 210 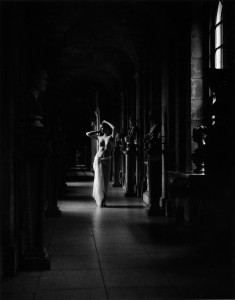 PHOTOGRAPHERS CHOSEN FOR 2013 US SEASON

Grace Vane Percy’s series of female nudes in classical settings reflect a strong creative flair, and artistic sensibility. The glorious, stately, backdrops celebrate English Palladian architecture at its finest. The Financial Times comments “Vane Percy’s approach is resolutely artistic” reflecting her training at the Charles Cecil studios in Florence as a classical artist working mainly in charcoal. This has also influenced her comprehension of anatomy, and the strong sense of chiaroscuro which is visible in her current work. Grace herself grew up in an English country house in Cambridgeshire. She studied history of Art at the Courtauld Institute and Fashion photography and darkroom techniques at Central St. Martins. She has been commissioned to photograph some of the most elite and successful women in London and New York. She has been invited to join the ‘Women in Photography’ Archive at Yale. Grace is working on her first book which will be published by Quartet, and was included in “Glorious 2012” at the Fitzwilliam Museum Cambridge.  In the words of London’s Evening Standard – “Grace is the best in town if not the world.”